Our own belief system controls our reality. 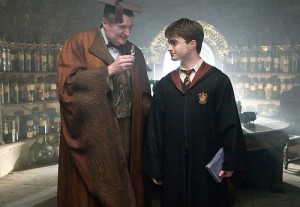 In the Harry Potter book “The Half Blood Prince,” Ron believes that he has been given , the lucky potion. Because his own belief system is changed, his reality also changes. He performs as if he had been lucky. Clearly this effect would only work if Ron already had the skills necessary to perform. The important point is how our own beliefs change our reality.

Each of us live in a reality that is generated based on what we see and not what is actually there. This is a huge problem in relationships and discussions since none of us can understand the world as seen through anyone else’s perspective. This is a huge bonus however because it also means that you have the power within you to change the world by simply altering your own beliefs. This is done by filling your mind with positive thinking, good education, and hard work. By sharpening our skills and increasing our mental capacity we become capable of changing our own world around us.

In the same book when Harry Potter finally understands that he must kill Voldermort because of who he is and what he did to his family instead of the prophecy it changes everything. The end result is the same but his world changes because of the reason. In his words “It was, he thought, the difference between being dragged into the arena to face a battle to death and walking into the arena with your head held high.”  Dumbledore worked hard to explain to him the importance of this single thing because changing Harry Potter’s belief would alter his own reality and make him all the more likely to succeed in his task.

What does this mean for you? It means that you have control over your world. All the complaining about your job, life, family, or circumstance is your own fault. Not just because you are a whiner (although true) but more importantly because the things you whine about are shaped in your own reality because of your own belief system over which you have COMPLETE CONTROL.

It also means that the way to change your own world is to change your beliefs. This means learning, finding purpose, and understanding your own values. To live by your own values and be conscious of the act will cause in effect a peaceful and happy reality! You are the author of your reality and you hold the power to change it.