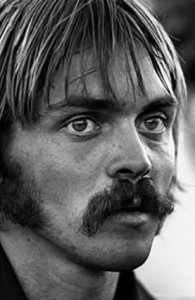 I know this might come as a shock but Nike was not born to give Micheal Jordan something to wear. Nike was born to fit the shoe of running legend Steve Prefontaine. Running sports have never had a large following perhaps because they just aren’t as much fun to watch or because they tend to be individual efforts instead of a team sport. What you need to know is that Steve Prefontaine was to running as Tiger Woods is to golf.  Legendary…

Steve Prefontaine wasn’t only famous because he held the National record in 7 different track events but more so because of the way he raced. He liked to give people something to watch and make a show out of it but what you have to understand the most about Steve is that he was a “front runner.” Front running is a term used to describe the foolish runner who leads the pack in a race. The lead runner takes battles up to 70% higher wind resistance than the runner who runs in his wake. Even olympic team members will take turns leading the pack while their star runner stays behind until the final moments. The thing about Steve isn’t that he ran in the front on ocassion but that he always led every single race from the start to the end.

He did it for one simple reason. He understood what running is really all about more than any other human in history. He understood that the only way to finish as a true winner is to give it everything that you got every single step of the way. He didn’t pace himself and he didn’t believe in strategy… he believed in winning out of pure guts…. and he did it almost every time.

His college track coach Bill Bowerman was the founder of Nike. He was famous for his waffle iron, home-made running shoes that he made for each of his runners. He founded Nike under the ideals that Steve Prefontaine lived. Next time you slip on your Nikes remember Steve Prefontaine and how he raced.

Action: Consider what you can do to step up to the plate. What are you afraid of and what is holding you back? What are the best people in your industry doing that you are afraid of doing?

Action: Watch the movie “Without Limits”

I run to see who has the most guts. – Steve Prefontaine

I’m going to work so that it’s a pure guts race at the end, and if it is, I am the only one who can win it. – Steve Prefontaine

Somebody may beat me, but they are going to have to bleed to do it. – Steve Prefontaine

Something inside of me just said ‘Hey, wait a minute, I want to beat him,’ and I just took off. – Steve Prefontaine

To give anything less than your best is to sacrifice the gift. – Steve Prefontaine

What I want is to be number one. – Steve Prefontaine

You have to wonder at times what you’re doing out there. Over the years, I’ve given myself a thousand reasons to keep running, but it always comes back to where it started. It comes down to self-satisfaction and a sense of achievement. – Steve Prefontaine