Everywhere I look I see finger-pointing and accountability avoidance. Business, politics, and anywhere else where a group of humans are forced to interact for mutual benefit. Its starting to make me sick. 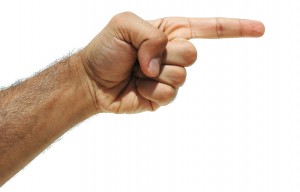 The Greatest Barrier is Denial

The first reason we tend to not hold ourselves accountable for our mistakes is because we don't think we have made any. This strong denial is often rooted in pride or fragile self perception. We don't know how to act and live inside of our own skin if we were to become vulnerable. We live convinced that we only withstand the harsh winds and storms of life because our outer shell is too tough to penetrate. In our sub-conscious we think of weakness in the armor as a threat to our identity.

Next Comes the Fear of Reprisal

Perhaps we often avoid accountability because we don't want to get in trouble with our boss, our constituents, or our friends. This only seems natural but of course it always backfires. We don't want the people who vote for us, pay us, or choose to be involved with us to lose respect or feel that we can't be trusted. In order to stop the behavior we must understand the true consequence of the action. Nobody can handle being with or working with someone who can't be accountable. Those who avoid accountability inevitably drive their own integrity into the ground and make themselves easily replaceable.

Our environment tends to not lend itself to encouraging accountability. We feed off of each other's poor behavior and are taught that its better to sweep something under the rug and just move forward. We see people throw the person not in the room under the bus and we fall into the patterns of behavior.

In addition, sadly the more successful an individual the greater their tendency to truly believe that they can't make mistakes. Their environment re-enforces the belief. Says Marshall Goldsmith, best selling author of What Got You here Won't Get You There, “Many of our delusions can come from our association with success, not failure. Since we get positive reinforcement from our past successes, we think that they are predictive of great things to come in our future.”

Last is the Sad Misunderstanding of Perception and Reality

Saying it out-loud must sound crazy but somewhere deep inside many of us actually believe that people want to deal with people who are perfect and never make mistakes. We think that a perception of perfection is the expectation and that society will reward people who come across that way. It is a sad and destroying myth.

The human spirit longs for people who are willing to be vulnerable and transparent. We grow tired of good salespeople and want someone who can honestly own up to their weaknesses just as well as they do their strengths. We seek and follow the people who are willing to openly learn from mistakes and pledge to improve and do better. We WANT people like this around us; but somehow we don't believe deep down that others want that of ourselves.

Own that belief. Bury deep in your system the belief that being publicly accountable will make you free and will empower you to grow and develop into something much greater. Liberty awaits those who are willing to stand up and own up to their actions. Unlock the producer inside of you.

If you agree I invite you to share this with others. I invite you to think of something you did recently that was not very good or could have been done better. Own up now. Share how you feel below or make that phone call or send that email now to those who were affected. Let them know that you will improve and do better next time.