In every possible way Albus Dumbledore from the Harry Potter stories, is the epitome of a great leader. There is of course the first are foremost organization of Hogwarts school that he leads forward with great leadership but much more importantly he is the leader of the greater fight against evil. There are a long list of things that make Dumbledore a great leader. Among them are some of the manager qualities of organization, reporting, and communication. However management never was leadership and Corporations who don’t understand that fail. What we are trying to establish here is the fact that Dumbledore was a great leader and establish what key traits made him such. 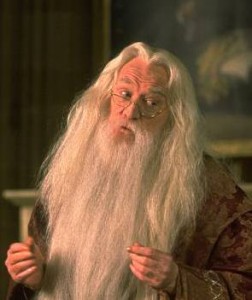 In trying to establish his leadership I suggest we look at the results that come from Albus Dumbledore’s leadership in the Harry Potter books. People of course love him and trust him, and his enemies fear him. His school runs smoothly despite his occasional absence or eccentric staff appointments and decisions. He also seems to have a habit of creating other effective leaders all around him. It would seem that he is somehow connected to every important and significant witch or wizard in the country. He is even the Chief Warlock of the Wizengamot, member of the International Confederation of Wizards, and founder and leader of The Order of the Phoenix but take note that he turned down the position of Minister of Magic. He works only in roles that give him an advantage in his goals. To further argue that he is a great leader I would point out that even though he does make mistakes (and he admits it), his goals are accomplished in the end. The reign of Voldemort comes to an end and that age of evil falls. Harry lives.

Accepting that he is indeed a great leader let us consider what are his greatest traits at the source of that fine leadership. Some of the more immediate answers might include that he knows his own strengths and utilizes them well. Perhaps the fact that he has an eye for great talent and knows how to effectively deploy people to the greatest advantage of the group and the individuals. He also adapts well to change and tends to foresee what’s coming. While these are all qualities of a great leader, and certainly qualities that Dumbledore possess, they are not the core qualities that define him as a leader.

Consider how his world revolves around two overlying values, trust and love. Dumbledore is a man who cares about the truth and has a strange tendency to trust people. Despite this people trust him so much that as Hermoine points out, “Dumbledore trusts him and if we can’t trust Dumbledore who can we trust?” People trust him for one simple reason. They know he sincerely cares about them. They trust that he has no hidden agenda or secondary motive. This trust comes from his ability to care or to be more frank, love. He loves people and sincerely wants what’s best for them. This isn’t a fake smile and a dance but a true feeling that comes from deep down. Consider anyone who you think of as a great leader and you will agree that you trusted them and you were confident they had your best interests at heart.

Dumbledore is always trying to train more leaders and Harry Potter is our prime candidate. Dumbledore could have spent time teaching Harry Potter a variety of magic or techniques but he knows how to create a great leader. He focuses on principles and key among them are a quest for truth and the power of true love. Remember that as you interact with people around you. Do you truly care about those around you? We are no longer in a society where facades and hidden motives can stay hidden. People can sense sincerity and a lack of it. Follow both Dumbledore and Harry’s example as you strive to become a great leader.