I'm a product of the internet marketing industry. In 2007 I built my first website and read “SEO For Dummies.” In 2010 I boarded 99 airplanes traveling the country and helping traditional media companies adapt to and sell online advertising.

Today, I operate an eCommerce business, manage about 20 websites, operate my own email marketing server, and consider myself an internet marketing professional. If anyone is on board with the digital revolution, it is me and almost every dime I've made in my adult life can be tied to digital advertising or online sales.

That said, I've recently been pondering on the survival and ongoing promise that retail presents to the greater world of business and commerce.

Online Will Continue To Grow and Dominate

Since the emergence of eCommerce the experts have been telling us that retail won't go away. Consumers still appreciate the experience of touching and trying products before buying them and shopping is for many a social activity.

Almost every promise made by experts 1 and 2 decades ago has been proven wrong. People will buy clothes and shoes online without fear of getting the wrong size and consumers will happily let someone else pick out all their groceries so they can simply load them up in the car or even pay to have them delivered to the front porch.

CODID-19 has been perhaps the greatest thing to dramatically push online sales even farther and faster than ever before. In 2020, consumers in the US spent $762.68 billion online, up by 27.5% from the $598.02 billion in 2019. This makes sense as consumers were encouraged to stay home and not venture out of the house. That year-over-year increase was the largest in at least 2 decades.

In short, there is no doubt that online sales are continuing to grow. There is no limit to what people will buy online. A house, a car, investments, clothing, a gun, and everything else is on the table.

Despite All That Retail Isn't Going Away Soon

From the above chart, you will also note that retail also saw a resurgence in 2021 as America returned to the streets with 14% growth which is ironically the same percentage of growth that eCommerce saw in the same period.

Perhaps an even more important perspective is to note that in 2021 retail still represents a huge majority of the money being spent by Americans despite the doomsday impression created by the recent death of brands such as Blockbuster Video, Toys R Us, Borders Books, RadioShack, Payless Shoes, Sports Authority, and Sears.

I don't know what things will look like in 20 years, but certainly, those who predicted back in 2005 that 20 years later we would see 80% of sales happening online will be proven wrong. That isn't going to happen, at least not that soon.

Reasons Why The Gun Industry Has A Very Bright Retail Future

I operate in the US firearms industry. While I don't sell guns or ammunition the gun industry is currently where I operate and represents the target demographic of most or all of my products. As you will see below, I feel the firearms industry is very unique in this conversation about retail vs eCommerce.

Here are 4 considerations that are relatively unique to the gun industry that I feel will strengthen retail businesses and make them more resilient to the erosion caused by the continued growth of eCommerce.

One challenge that will prevent or slow the adoption of eCommerce in the gun industry is the lack of online service providers that support the industry. A large number of the biggest merchant websites, credit card processing providers, shopping cart software developers, and web hosts refuse to work with companies who sell guns or ammo, and a surprising number won't work with other companies in the gun industry despite them NOT selling guns or ammo.

Consider Amazon for example. Amazon.com accounted for more than 40% of all U.S. eCommerce in 2021. However, despite being the 800 lb gorilla online, you can't buy a gun, ammunition, or anything that could be used with or on an AR-15 from Amazon.com.

Amazon isn't alone. Consider that gun sellers or manufacturers can't run advertising on the top two marketplaces of advertising in the US: Google and Facebook.

Even online sales require a brick and mortar store

You might be thinking right now that you hear all the time about people buying and selling guns online. It is true that a transaction or sale of a gun can be conducted online between two parties, but consider that the buyer can only take possession in person from a licensed gun dealer. 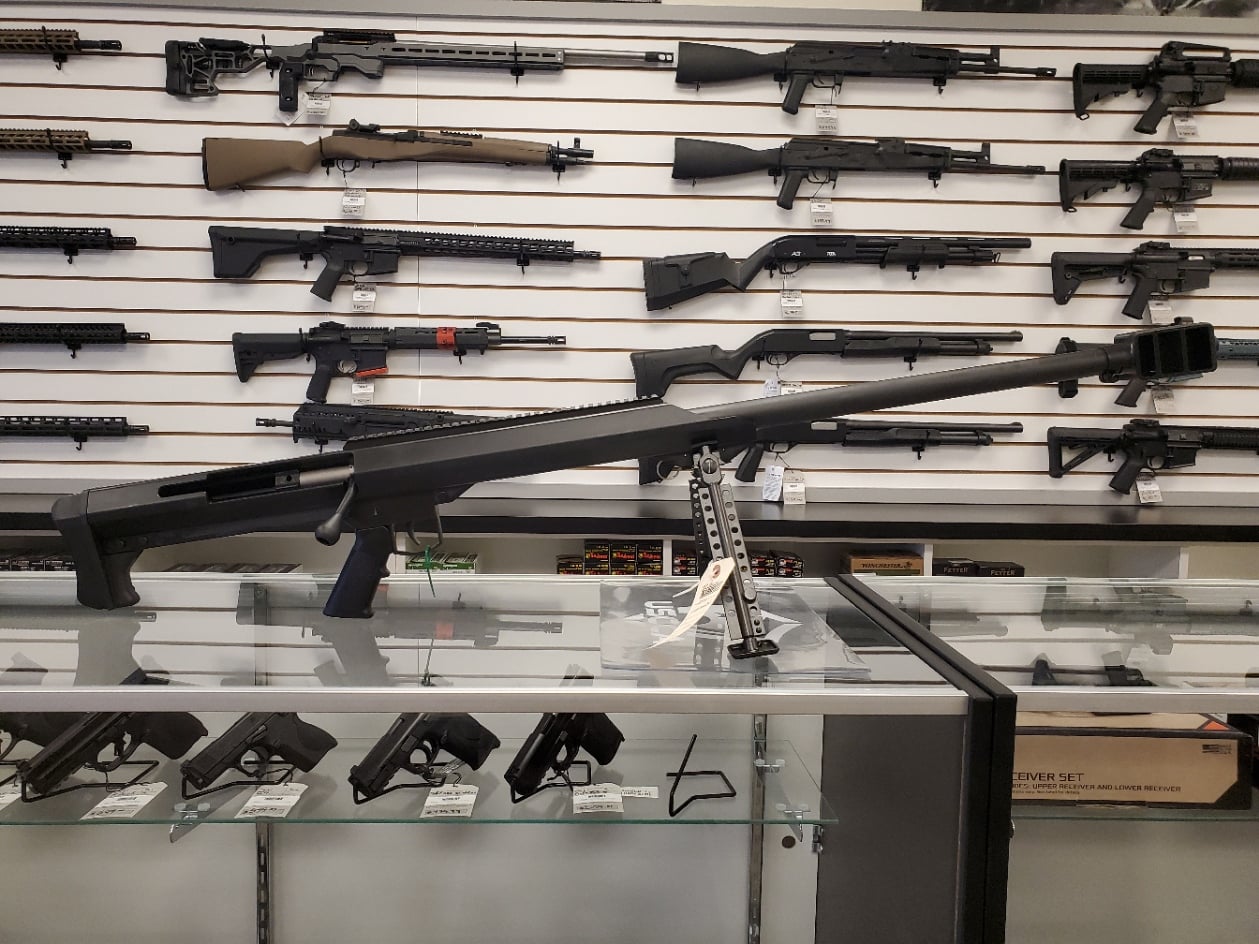 You might be thinking right now that you hear all the time about people buying and selling guns online. It is true that a transaction or sale of a gun can be conducted online between two parties, but consider that the buyer can only take possession in-person from a licensed gun dealer.

There are exceptions in many states for private sales between two individuals, but that still represents an in-person transaction. Thus, effectively no legal online gun transaction is completed without an in-person meeting of which the vast majority happen at a retail gun store.

There is a current movement to pass what is generally known as “Universal Background Check” laws which prohibit private party sales/transfers. These laws, which I consider an infringement of our constitutional rights, already exist in many states but if such a law is passed at the federal level, the already very high percentage of legal gun sales that are finalized in a gun store will increase to an even higher percentage.

Can you think of another industry where an online transaction of the product requires the existence of a physical retail store in order for the transaction to be finalized?

Use the product where you bought it

The gun industry is also unique in the reality that a large number of consumers are effectively limited to using the purchased product at the store where they bought it.

Laws vary from jurisdiction-to-jurisdiction about where one can shoot guns, and a large number of Americans have fast and easy access to public or private land where they can enjoy the competitive or recreational shooting of firearms.

However, both because the weather doesn't always cooperate and because a lot of Americans live in densely populated areas, the indoor gun range is often the only viable place to enjoy a gun.

Obviously, not all gun stores also have a shooting range but many do, and it is hard to imagine the death of gun ranges and thus the retail operations connected to those ranges will continue to prosper.

How many other industries can you think of in which a large number of consumers can only use the product by returning to the place they bought it?

Regulation Will Continue to Force Buyers to Buy In Person

It is worth considering that many states have laws that prohibit the online purchase and/or delivery of guns, ammunition, knives, pepper spray, and body armor. I'm no expert, but my limited research identified 5 states that effectively require a purchase of ammunition to be finalized or made at a retail store or authorized dealer due to regulation.

Certainly, in those states, it would be more difficult to drive online sales of restricted products, and as such, retail stores will be even less likely to benefit from the growth of eCommerce.

While these restrictions present an obvious infringement on the second amendment of the US constitution sadly I don’t see them going away and in fact, I think it likely we see more restrictions on the online sales of ammunition and firearms.

Online Sales Are The Future But Don't Ignore Retail

For me and my business, our conclusion is that while we need to continue to focus on online sales we also shouldn't be ignoring retail opportunities. Retail distribution is still the key to the success of any significant company in almost any industry and the firearm industry is no different.