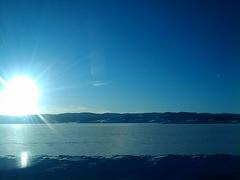 This is the view I woke up to on Saturday morning. I went on a ice fishing trip with the young men from the church this weekend. We went to the current creek reservoir which is close to strawberry reservoir in central Utah. The first adventure came when one of the boys informed me that the clothes he had on his back was all that he brought with him. This consisted of tennis shoes, jeans, t-shirt, and pullover hoodie. For camping in the mountains in February this was going to be a disaster. Luckily for him enough boys had enough spare coats, gloves, snow pants, etc to donate to his cause.

Ami made me a phenomenal tin-foil dinner which consisted of diced chicken and potatoes. I was the only one to cook mine in the fire as the other boys either brought subway or cooked their dinners over the propane grill. Back in my day…

Several of the boys were convinced they were going to build snow caves to sleep in and though several made valiant attempts only one 12 yr old was able to craft something big enough for him to sleep in it. The sad thing is that he was the only one who got any sleep at all. The rest of us spent the night trying to dream of warm climates and thicker clothing. Even in my thermals, snow pants, heavy winter coat, gloves, beanie, and LL Bean mummy sleeping bag I was freezing cold!!! We guesstimate that temps reached 20 below that night. It was horrible.

The next morning was exciting as we did a little ice fishing. We shuttled the boys across the reservoir on snow mobiles (my first experience driving one) where we dug small holes in the ice (about 8″ deep) and put in our lines. This was my first time ice fishing also. There were a total of 4 fish caught between the 18 of us. The most excited moment was when one of the boys was reeling in a fish. I got next to his hole to grab the fish when he brought it out and just as it was coming out of the water it managed to jump off the hook and back into the water. I reaching in after him with my right hand and managed to grab him as he was swimming off. I pulled him out and chucked him onto the ice. It was some sort of reaction and I swear I’m not making this up. It was almost ninja like.