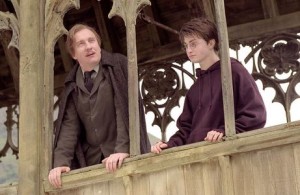 Every year I listen to the Harry Potter books. Something about the epic story really captivates me. As I am moving through the books right now I intend to post a series of posts on personal development lessons we can learn from Harry Potter and his stories. Here is the first installment.

The above quote comes from book 3 in the series and has had me thinking all day. Most people set there fears on specific things such as spiders, heights, water, death, and even commitment.

Harry Potter, as is suggested, fears most of all fear itself. Someone who fears fear is most likely to confront and overcome anything they suspect might scare them. Is this wise?

I am suggesting that our friend Professor Lupin from the story was right, and that this practice/attitude is wise. Why? What is to be gained by confronting and overcoming things that scare you? There are a few simple and logical answers.

1. Overcoming fears will mean that you are scared of less things. This can only be a good thing.

2. The process of confronting fear will only strengthen your character, giving you more power to deal with the conflicts that life gives us.

3. Fearing fear itself gives you a strong understanding of reality and thus gives you more freedom in life to take action and pursue happiness.

People who struggle with fears but are too weak to confront them, face two very large problems. First is that they are bound to live life in constant fear. Second being that their ability to deal with conflicts is generally weakened as they continue to “run” away from the things they fear.

It certainly works for Harry in the story. Although Harry sometimes plunges into dangerous situations unwisely, it is foolishness and not a lack for fear than often puts him in danger. His ability to confront fear instead of dread it however proves to be a helpful trait. It allows him to think logically when under stress, and to do what is frankly necessary regardless what the consequences might be. Harry Potter fans will mistakenly notice this reoccurring pattern throughout the literary saga.

I suggest we all follow Harry’s example and confront our fears head on. By fighting them we increase our own ability to live life to its fullest and function within a true reality of our environment.

Overcoming fear does not mean we need to put ourselves in danger to prove we can handle it. If you are scared of lightning it may not be necessary to stand on top of a hill in a puddle of water during a thunderstorm. It does mean you need to learn the true reality of how lightning works and live in caution but not fear.

I leave you with this final thought; Fear Not. Fear is a tool used to keep you at bay, controllable, and weak. Confront it and overcome its power over you. This will make you both free and strong!

Ask yourself this question… what would your bugart transform into?