I had the chance to spend 5 days in Alaska this past week. This was my first time in the 49th state of the US and I learned a lot about the differences that exist in that state. Mostly these cultural differences come from the climate and the general lack of people (also due to the climate). Here is my short list.

While I was there I was working with the Daily NewsMiner Newspaper. On their building they have a live webcam that can be viewed on their website at: http://newsminer.com/pages/arcticcam Before I left a few guys at work made an arrangement with X96 fm out of Salt Lake City to give us some of their famous Boner t-shirts in exchange for me wearing the shirt in front of the Artic Cam in Alaska. Their is a section of the X96 site (Click Here and select the “Boners Around the World Album) where pictures of people wearing this shirt around the world are displayed. Watch that album for the picture. Meanwhile here is a different picture of me on that cam that Ami took off of her computer: 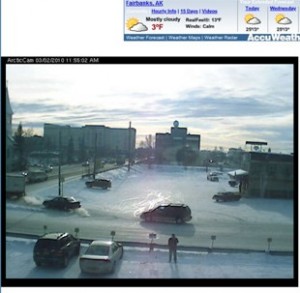 All in all I had a great time and I hope to go back again in the summer to see the gorgeous country side and spend a little more leisure time with my family and the friends I made there. Alaska, what a wonderful place to visit!