This will be published on April 19th, 2021 exactly 26 years after the Oklahoma City Bombing. The lessons learned that day by our nation need to be refreshed and reshared.

In April 1995 I was 11 years old. I have some memories of people referring to the “Oklahoma City Bombing” later in life but I have no memory of the event taking place when I was in the 6th grade.

You can get all the specific details on Wikipedia if you like but in short, a man named Timothy McVeigh detonated a bomb in the front of the Murrah Federal Building in Oklahoma City. 168 people were killed including 19 children. 324 buildings within a 16 block radius were damaged. This was the deadliest terroristic act in the US up until 9/11.

I was in Oklahoma City attending an event at the invitation of CCW Safe; a company that I do business with and greatly respect. I slipped out of a social event in the evening and walked 4 blocks to the memorial.

The museum, which no doubt is amazing, was closed when I arrived. I was restricted to experiencing the outdoor, public memorial itself.

I hope you can visit the memorial yourself one day but with brevity in mind here are few things worth noting about the memorial: 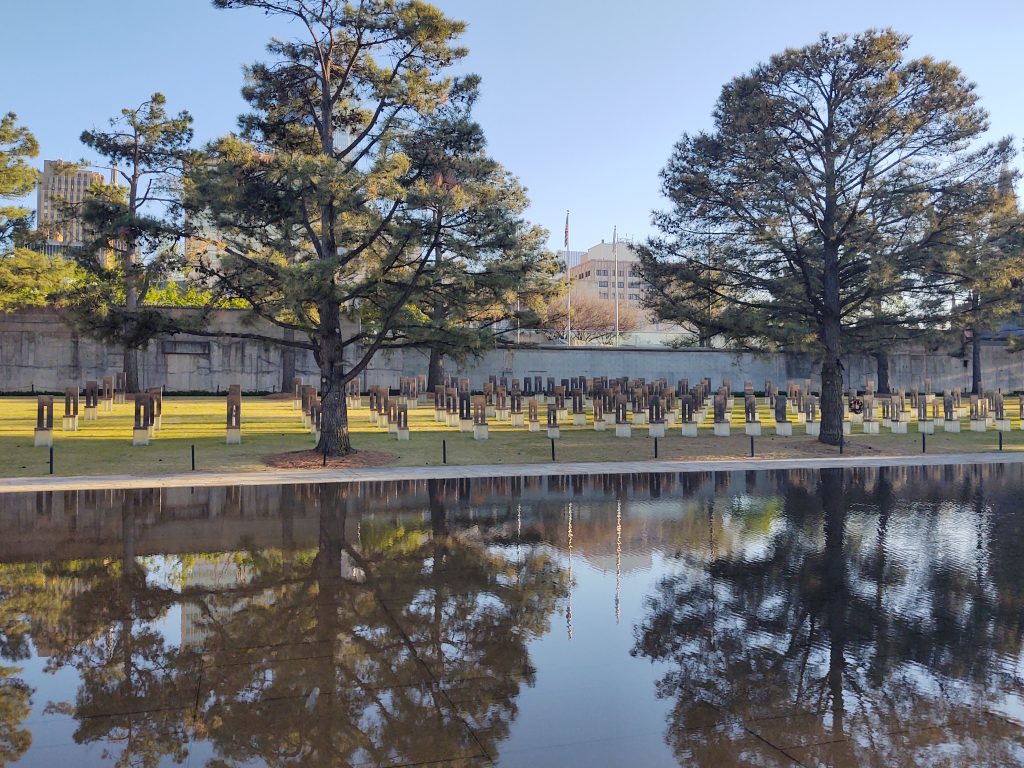 In this picture, you see a reflection “pool” which I believe runs where the street recently was in front of the building. The van which contained the bomb was likely parked in what would basically be the middle of this picture.

Across the pool, you see some “chairs.” 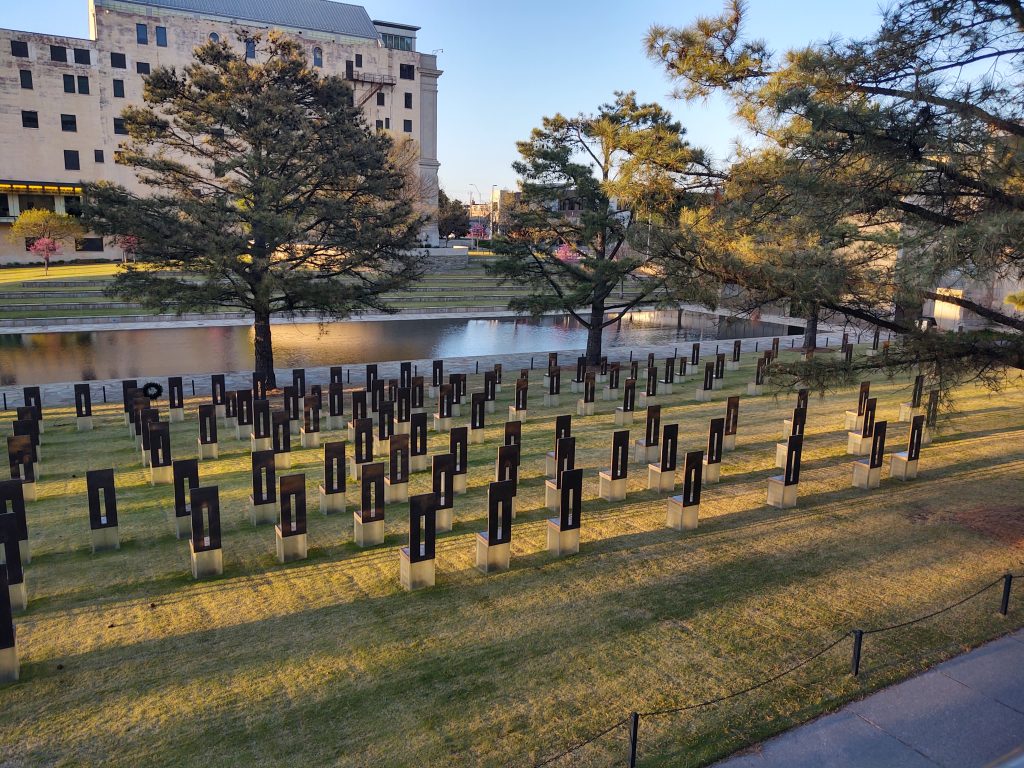 This picture is now from the south side of the memorial from the plaza looking north. These chairs sit exactly where the building previously stood. Each chair represents a specific victim. The chairs are positioned in rows based on the floor of the 9-story building where those victims died. In the background of that picture you can almost see the survivor tree. 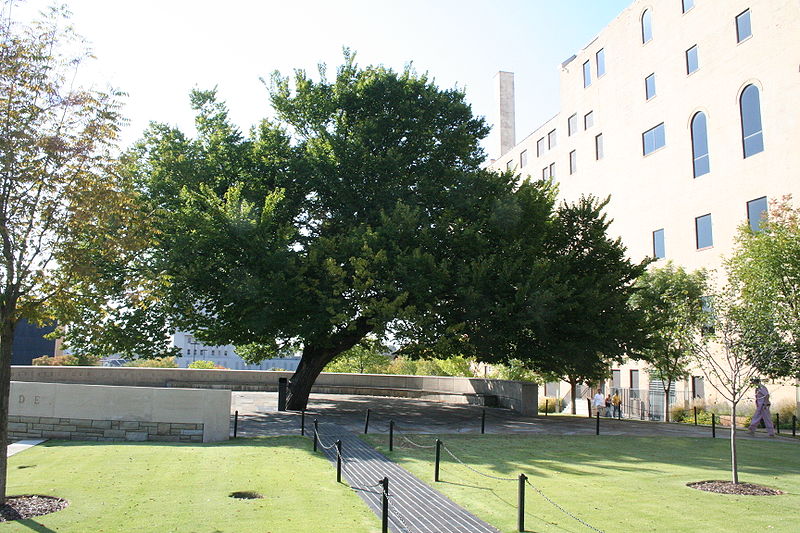 The survivor tree is a tree that was in the parking lot in front of the building. The bomb was placed between the building and this tree. The tree survived the bombing and today stands as an important symbol. The tree leans away from the explosion.

The tree is surrounded by a short wall. On the outside of the wall is written “To the courageous and caring who responded from near and far, we offer our eternal gratitude, as a thank you to the thousands of rescuers and volunteers who helped.” It faces an orchard that is dedicated to those responders.

On the inside of the wall is written: “The spirit of this city and this nation will not be defeated; our deeply rooted faith sustains us.” 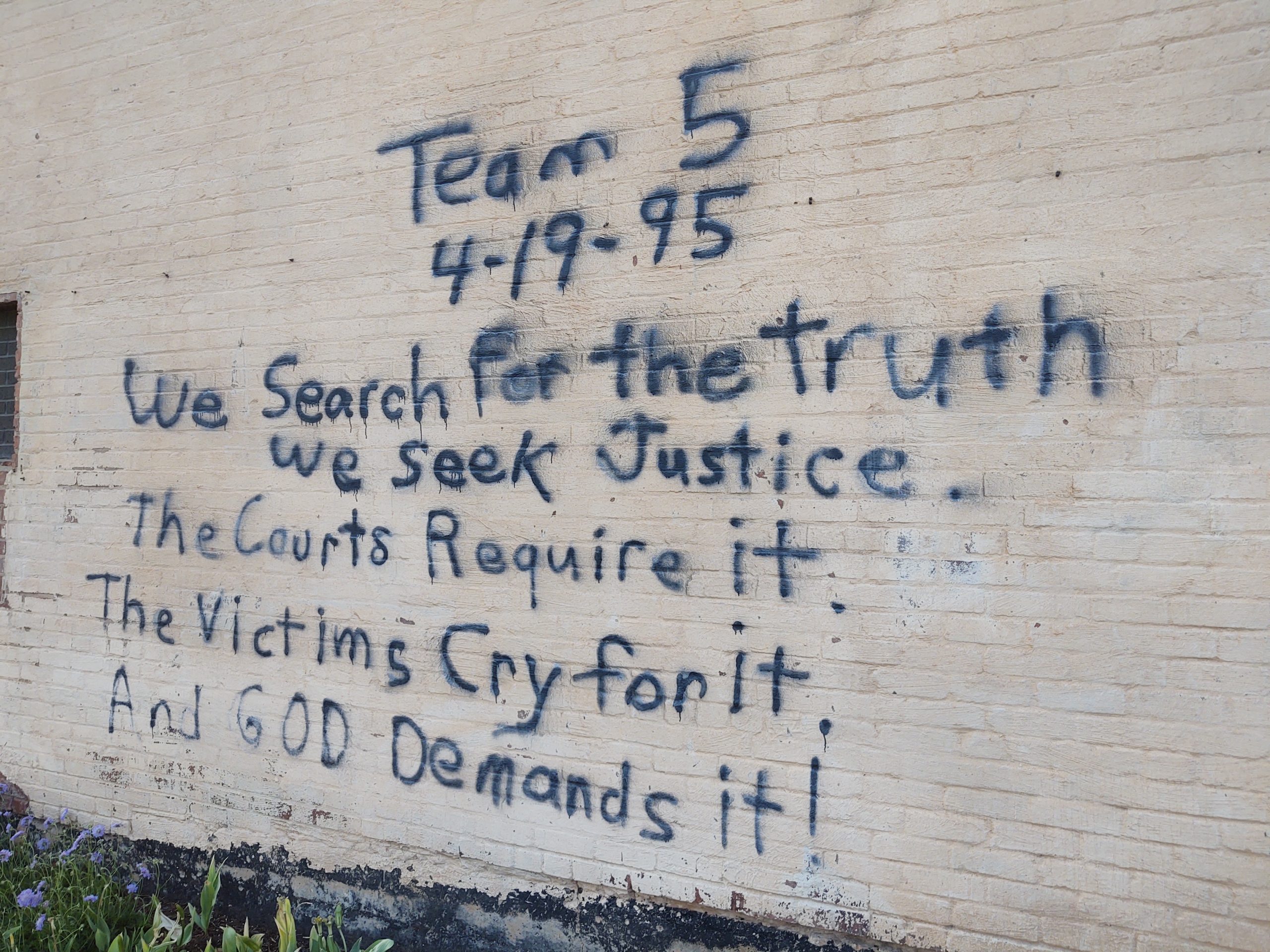 This message was sprayed on a wall of a neighboring building on the day of the bombing by a member of the Oklahoma City Police Department.

The memorial has many more components and ultimately I think any American should visit it themselves. I'll certainly be back when the museum is open.

The Best Part Was Yet To Come For Me

I finished my walk through the memorial and returned to the social event. The founders and executive team members of CCW Safe who were hosting the event are all former OKC cops. It naturally occurred to me that they were all likely on the force at the time of the bombing.

In the next hour, I spoke to 4 members of the executive team of that company. Their stories were shared with me personally and I don't have permission to share them on this public website. However, their experiences ranged from pulling out bodies, identifying them, responding to the initial blast, securing the site, etc. One of them is married to someone whose father died in the blast. One of them was a part of team 5 which is referenced in one of the pictures above. All of them lost people they knew well.

My experience over the course of about 2.5 hours was personal and moving. I read letters from family members to their dead parents (now posted to the fence at the memorial) and I heard several first-hand accounts about the tragedy and aftermath.

Hate And Violence Are The Problems

McVeigh had some problems. Anyone who kills 168 people and doesn't regret it has problems. That said I think a lot of people in America today could relate with McVeigh.

He was disgusted by what he (and millions of other Americans) saw as Federal failures at Waco and Ruby Ridge.

He was passionate about firearms and the second amendment. He felt that the only way to “fix” the country was to start a revolution against the government. He saw himself as a patriot, not unlike the founding fathers.

Sound familiar? For as long as our country has existed there have been people who were not happy with the conduct of the government or a group of people.

Today many feel or perceive that the division is greater among the American people than ever before. Unity is missing and brotherhood is gone.

Feeling that the only way forward is to resort to extreme beliefs, hate, and violence is to give in to the evil that leads to tragedy and division; NOT healing and growth.

It may not always lead to the death of 168 people, but hate and violence always destroy the most important part of the American Spirit.

The residents of Oklahoma City have a memorial in the middle of the city that stands as a reminder of the tragedy that comes when we fail each other.