We started beekeeping on April 25th, 2015. Our first year was a great learning experience (details below). On most days the camera is fairly boring to watch but we hope the camera along with  our detailed beekeeping notes below will help or inspire or people to keep bees. Hive is located in Arvada Colorado. You can ask questions or leave comments at the bottom of this page.

June 2017: Hive inspection. Top boxes are both around 30% capacity.

April 24th, 2017: Got a nice swarm in Thornton Colorado today. Put it in the second hive. 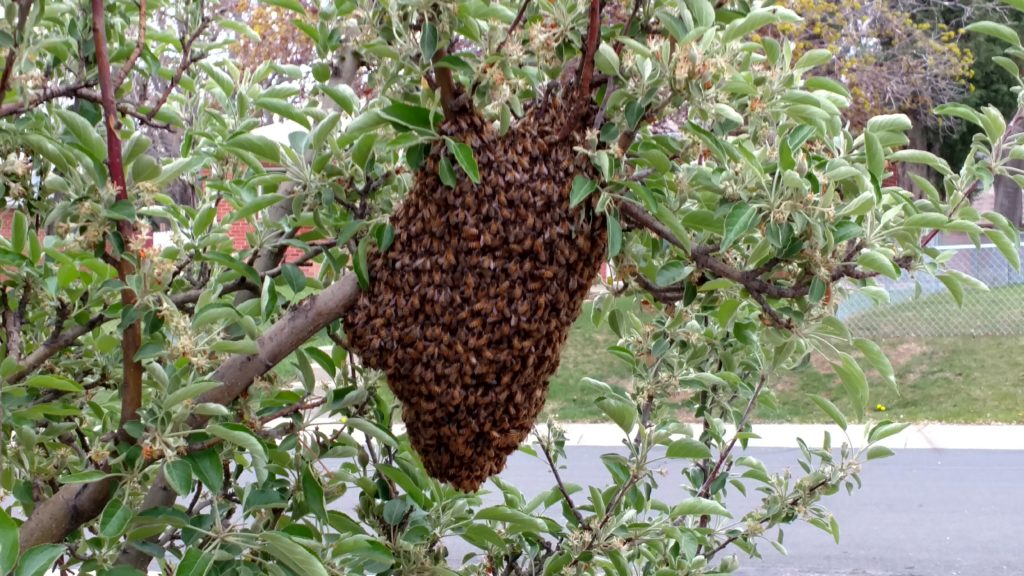 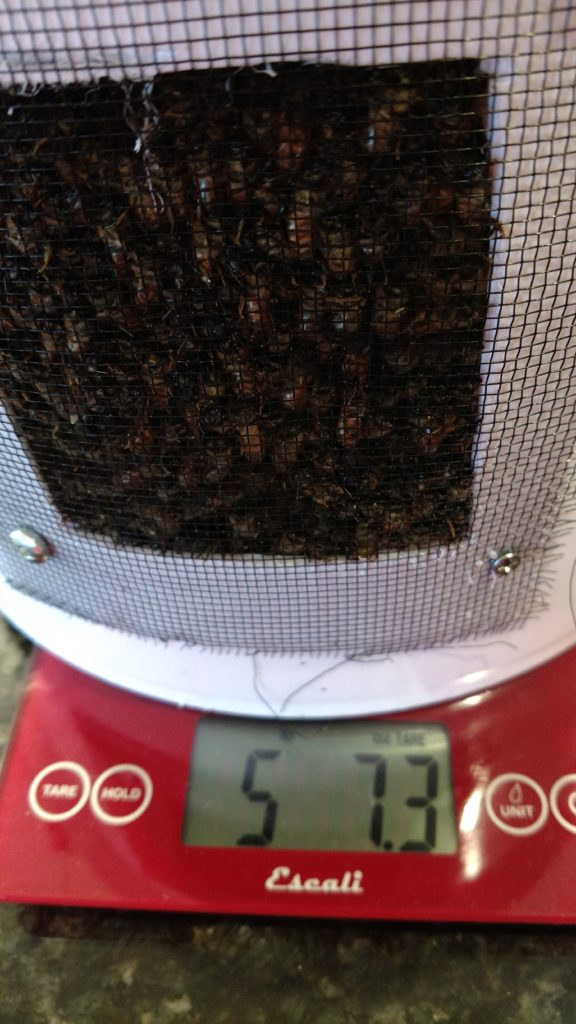 April 23rd, 2017: Got the camera back online today for the first time at the new house. 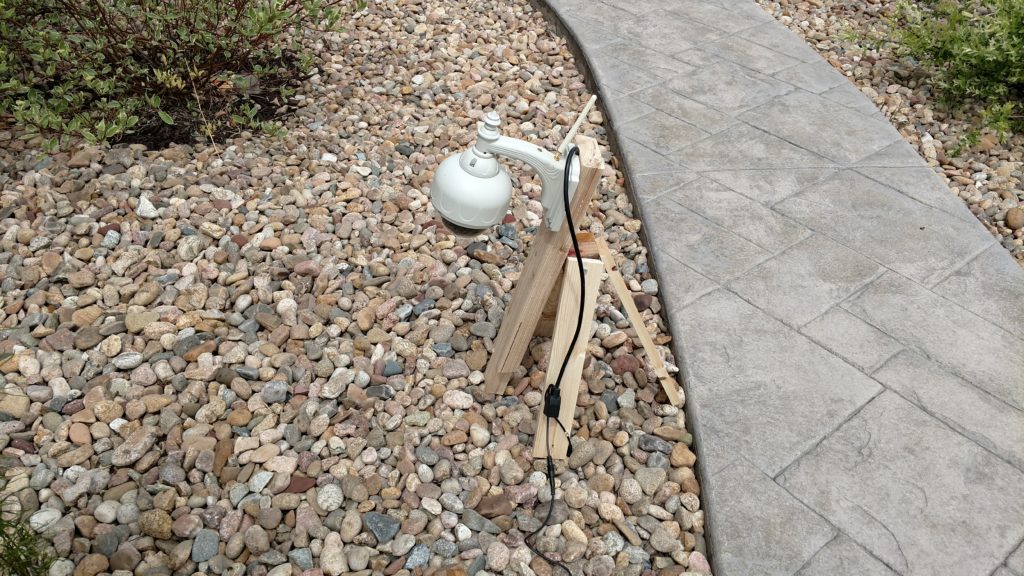 April 15th, 2017: Setup the second hive box hoping to find a swarm here in the next week or so and want to be prepared. 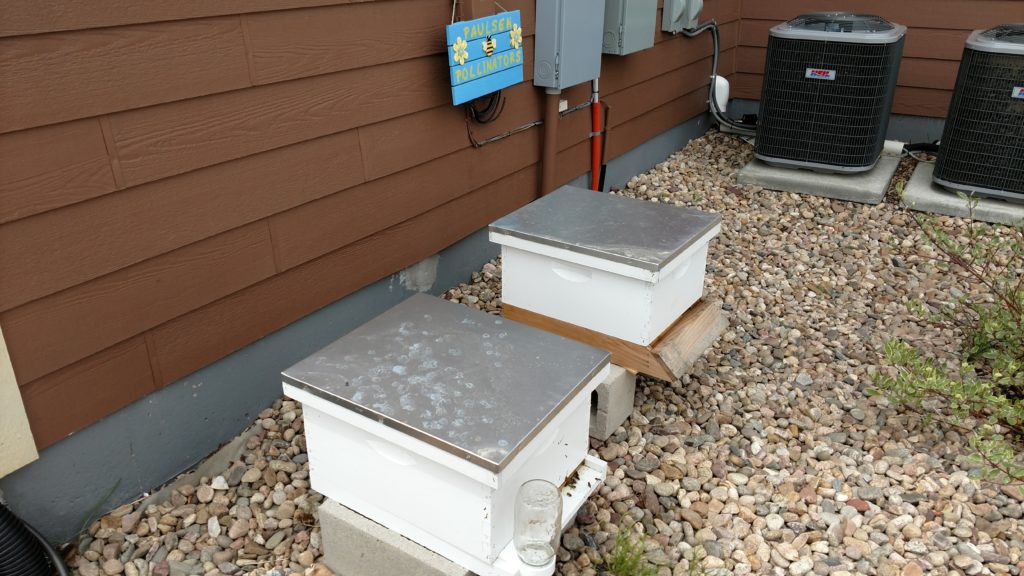 Click the below months to expand the updates from those months including the pictures.

November 9th, 2016: I took all the frames from the dead/empty hive and 1 of the boxes of frames from the other hive and did my first honey extraction. Went to a local beekeeping store and paid $.50 per pound. Ended up with 40lbs total. 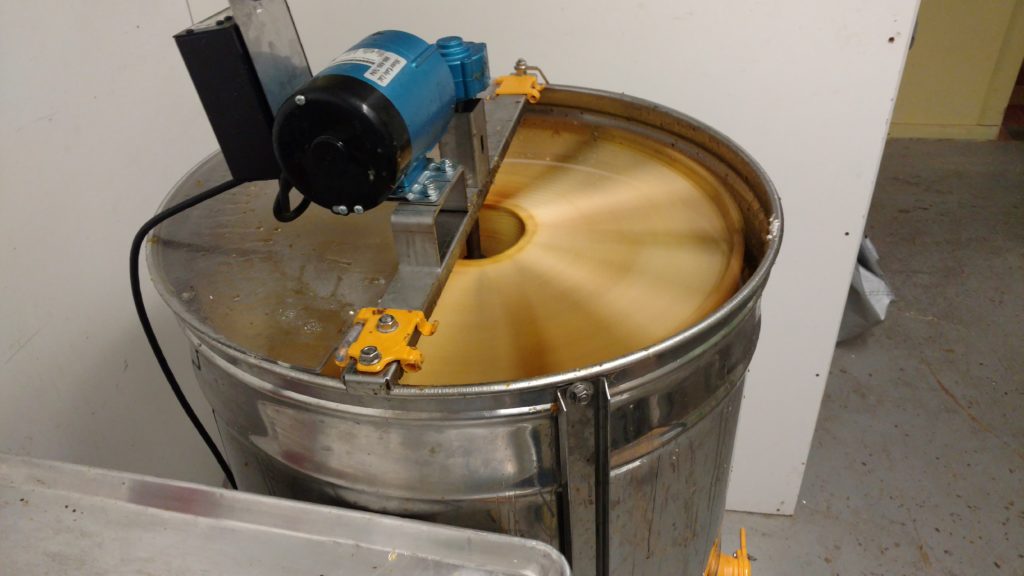 September 2016: Out of nowhere one of the hives is deserted. I do see some evidence of mites so I'm inclined to think that was the issue here. It had been about 2 weeks since I was last in the hive. The surviving hive is very aggressive.

June 17th, 2016: We moved into a new home in a new neighborhood. Moving the hives was simple. I read some info on a few websites. Early in the morning I blocked off the entrance to each hive and tied the boxes together tightly and then moved them to the new house.

May 3rd, 2016: Today I captured a swarm in our neighborhood. Big group hanging on a tree. I peeked over the person's fence and saw their neighbor had 4 hives so I know where the swarm came from! I've just hived them in the back yard next to the existing hive so for the first time ever the Paulsen family has 2 hives. The 2nd hive has brand new boxes but I've put in frames from last year's hive that already have a lot of comb and in a few spots some capped honey. This will hopefully get them off to a fast start. I adjusted the camera so that viewers can see both hives.

April 25th, 2016: Today I captured a swarm at a Hilton hotel in the Tech Center of Denver. The local ABC affiliate met me there and filmed the entire process. Brought them home and put them in a hive. I'm using frames from last year's hive. Some frames have capped honey, others are just comb. Hopefully it will help the hive thrive to have a head start despite having to clean up the old and dirty frames. 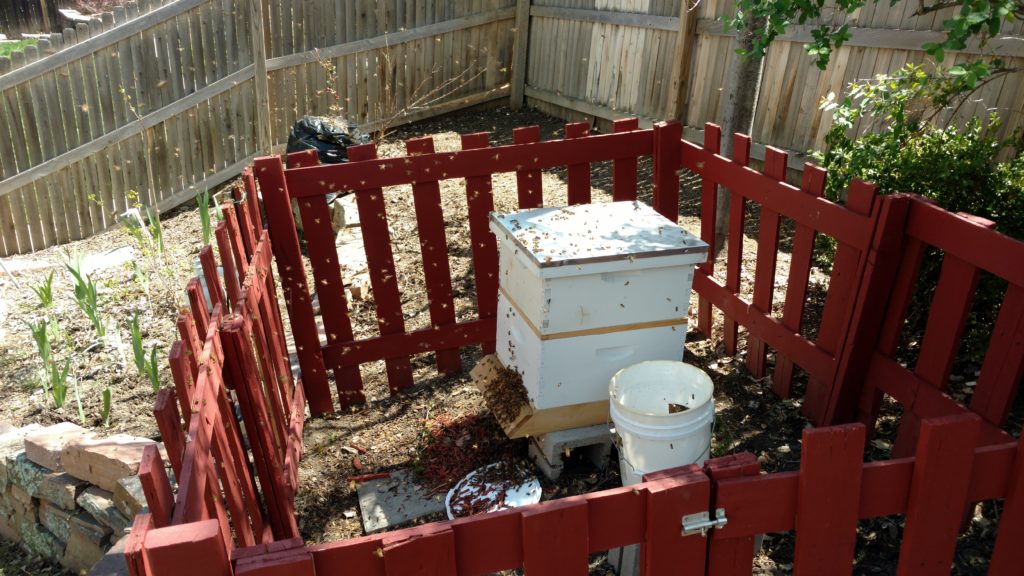 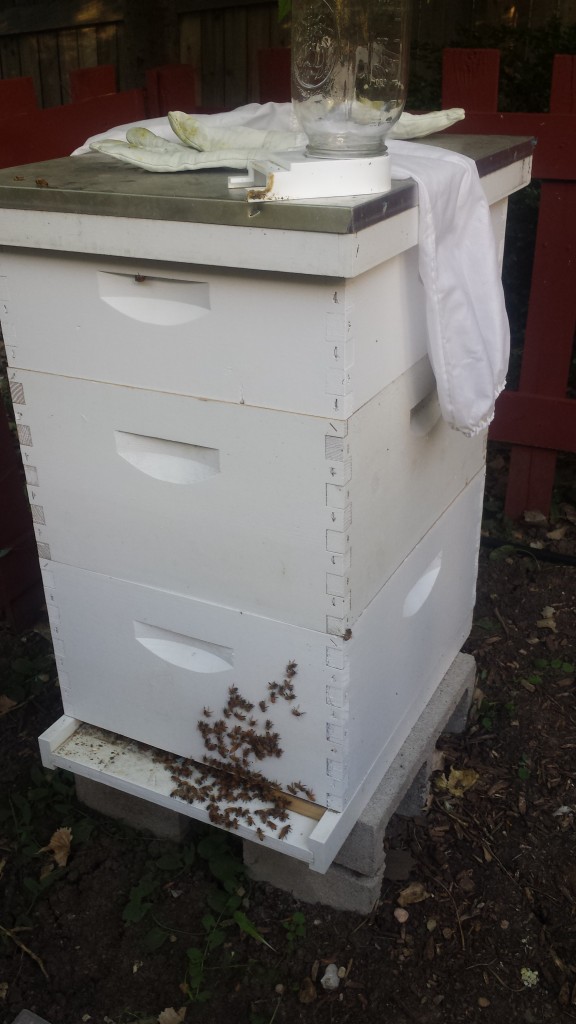 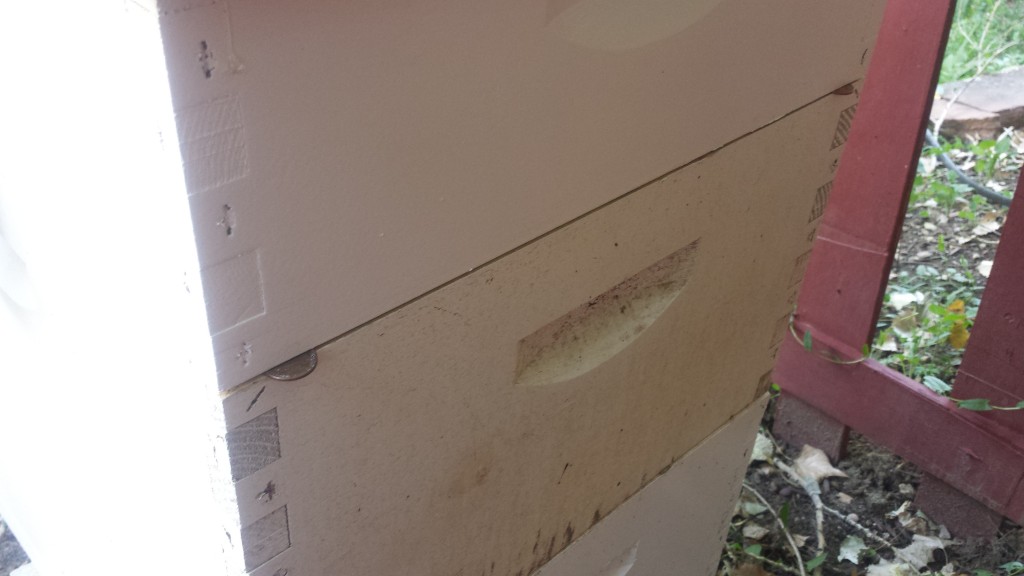 We inserted a few pennies in the back between the boxes to help vent the hive a little.

Here is the honey comb that we scraped off of the inside lid and top cover. 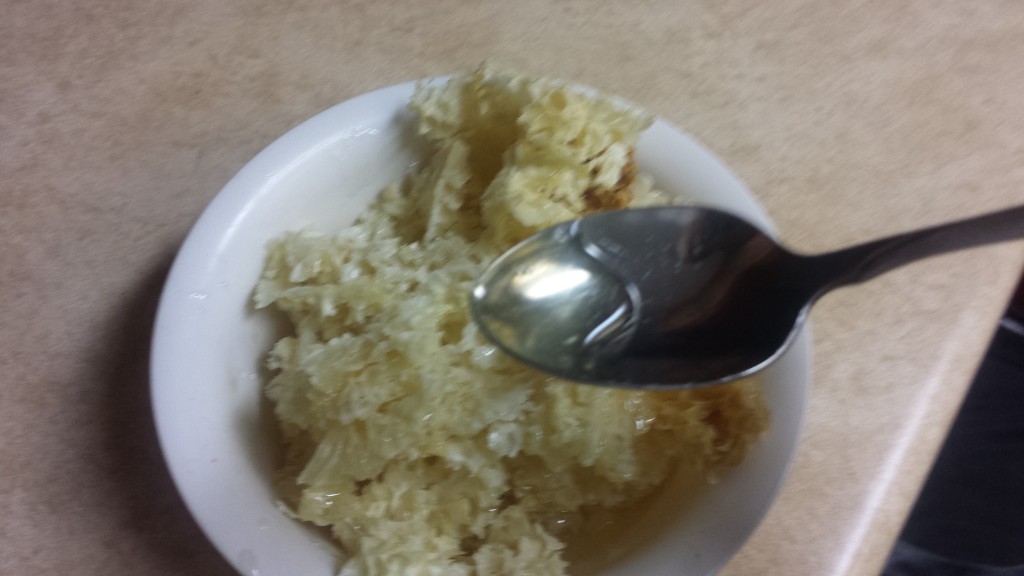 Here is the honey we were able to get out of that honey comb: 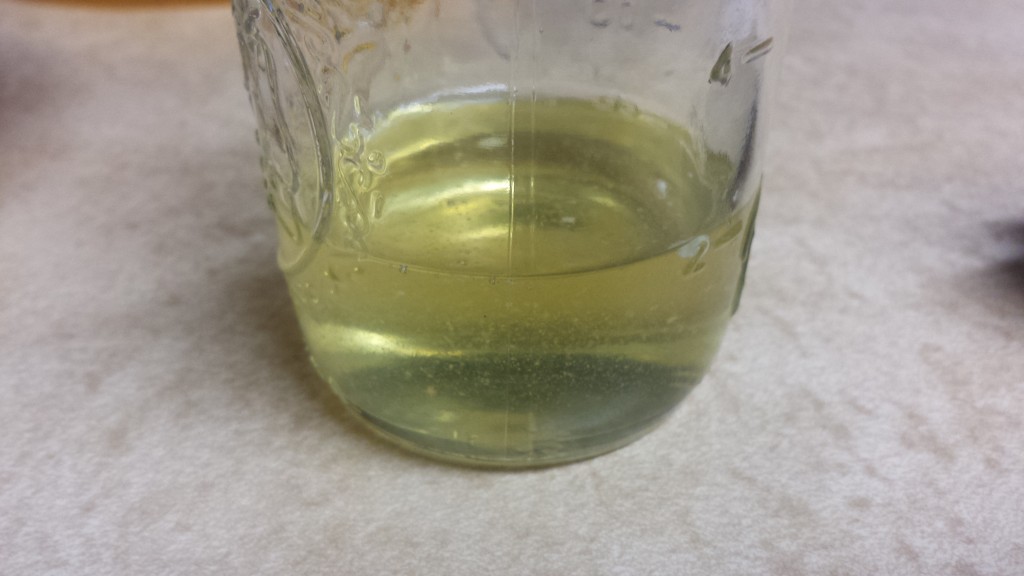 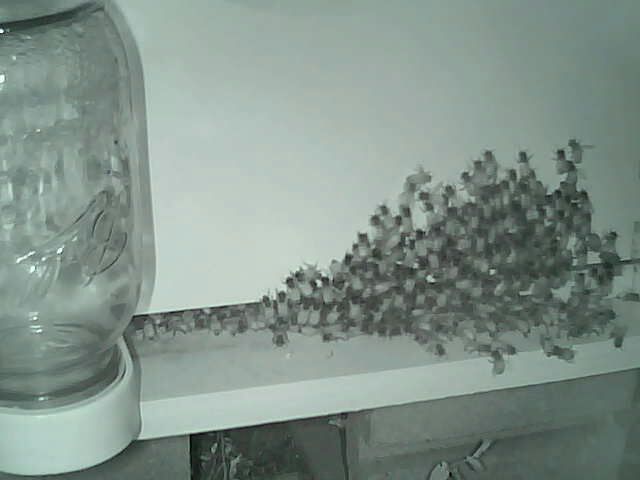 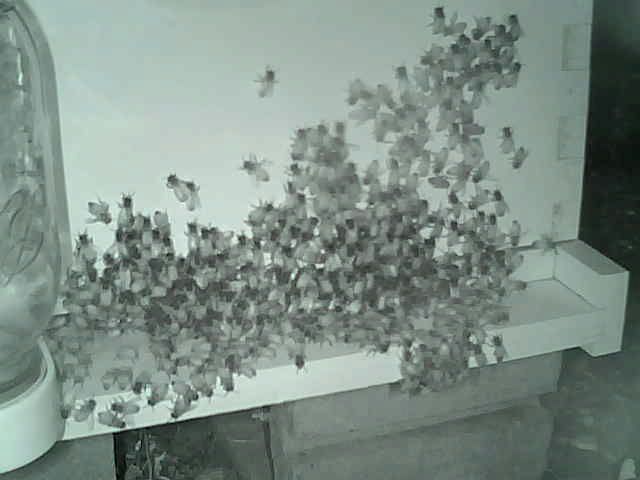 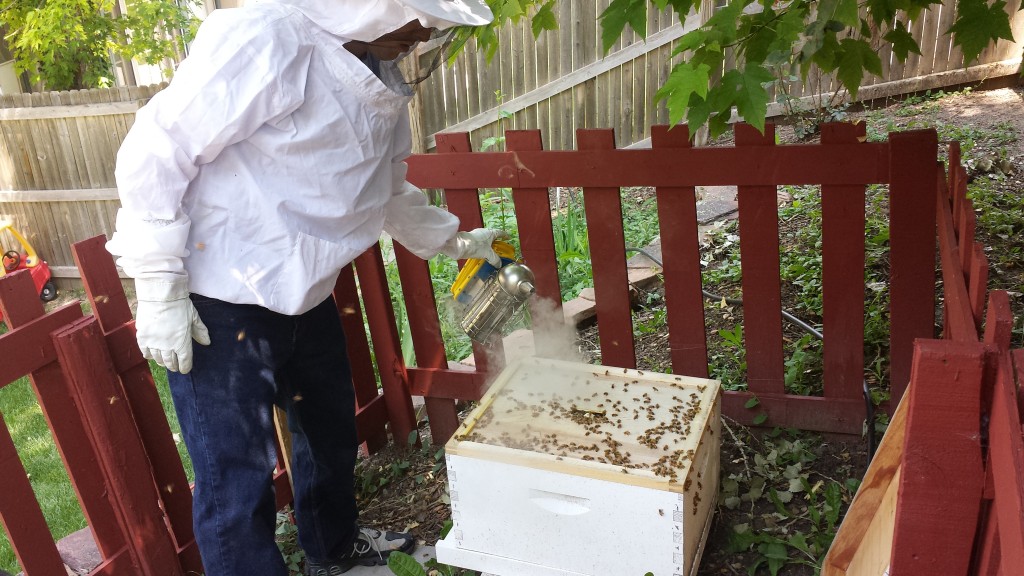 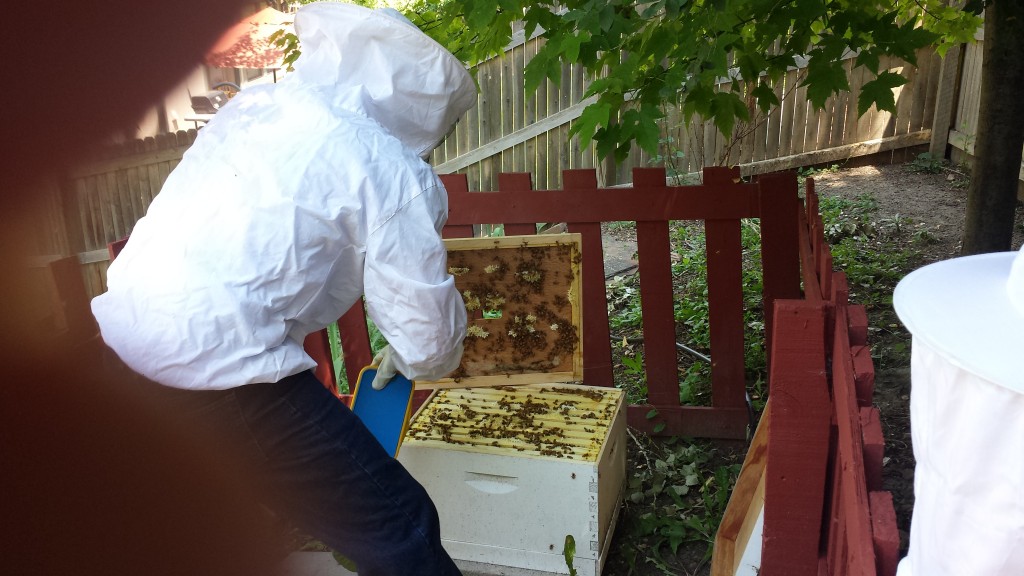 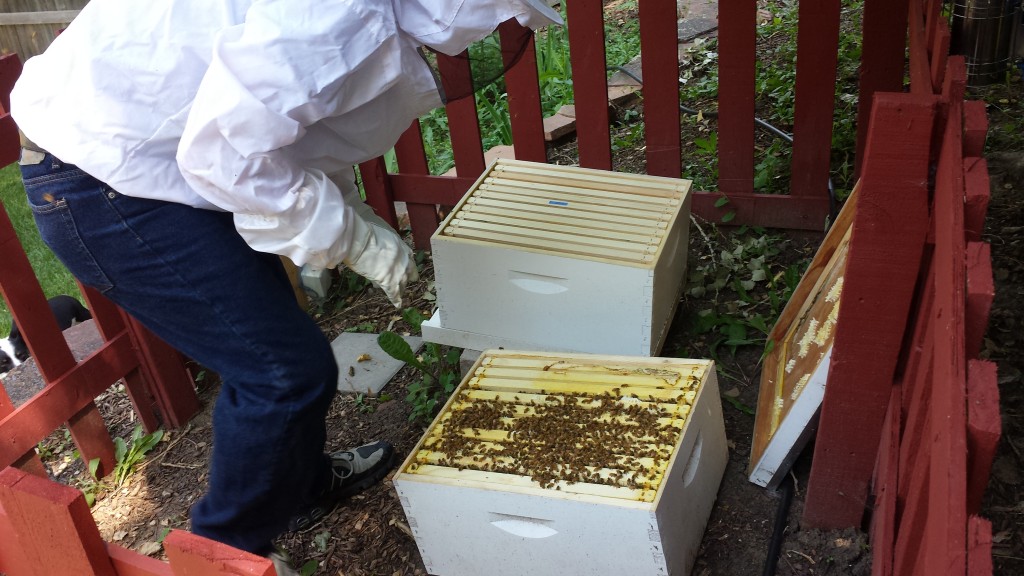 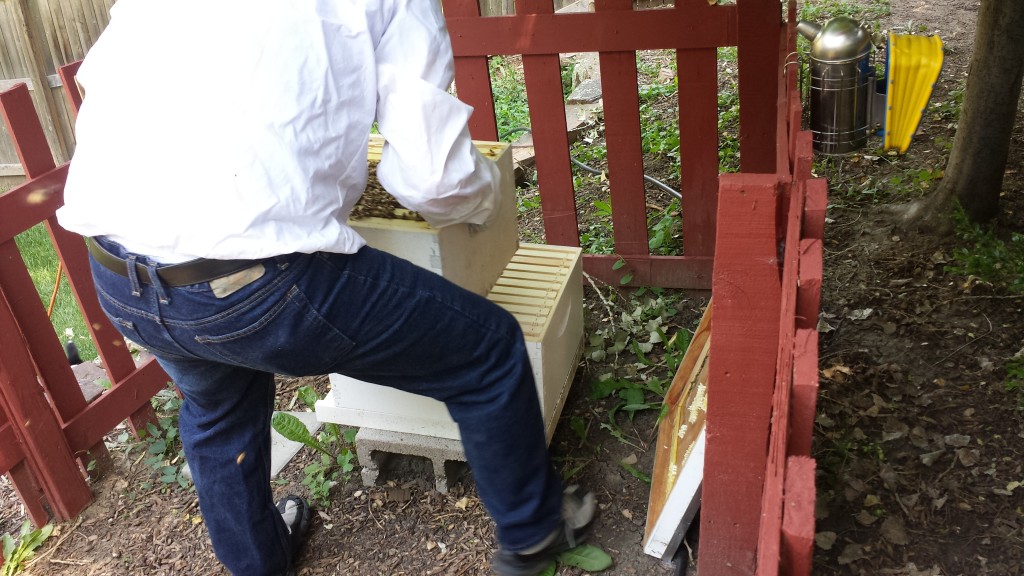 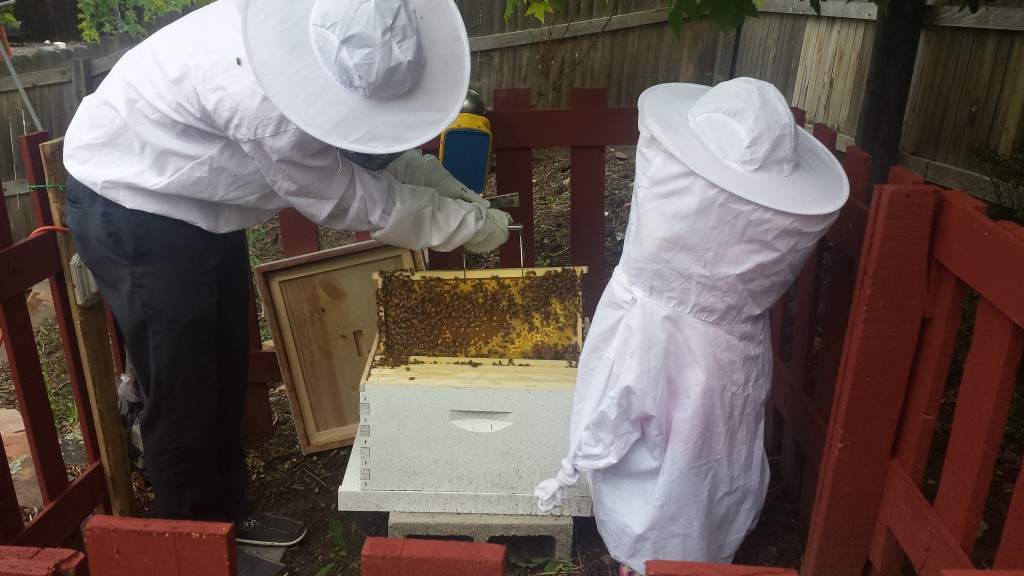 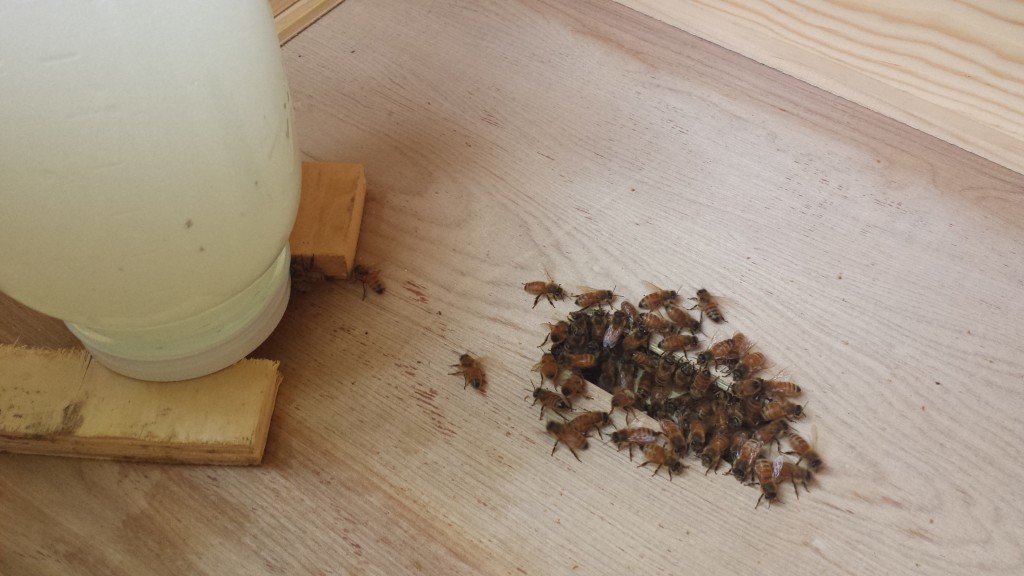 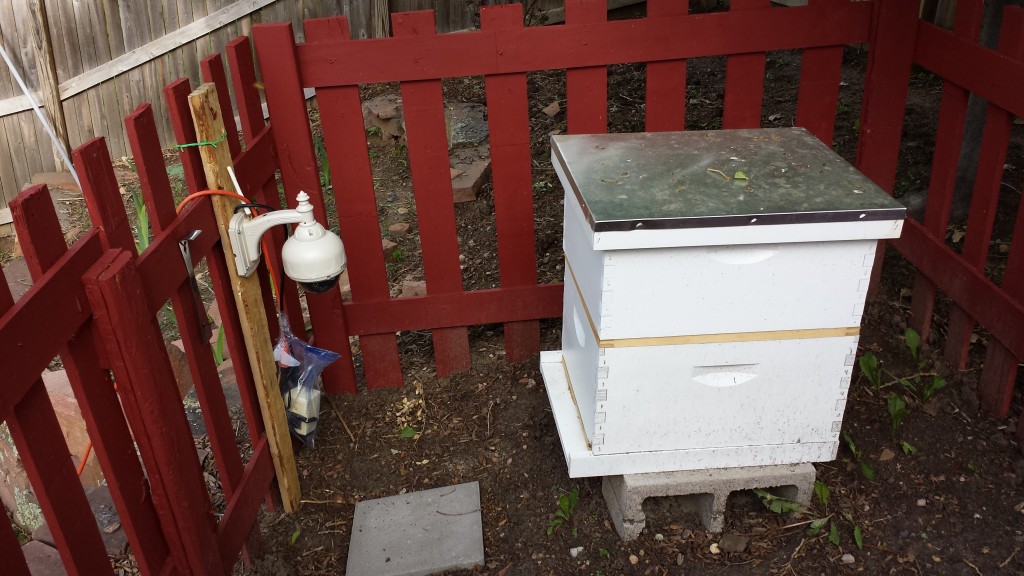 The day we got the bees: 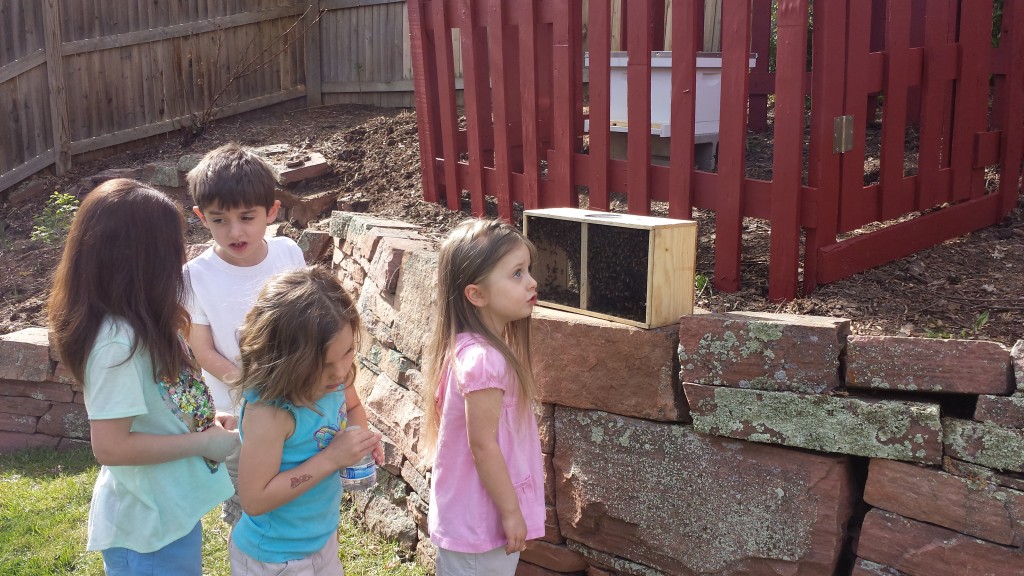 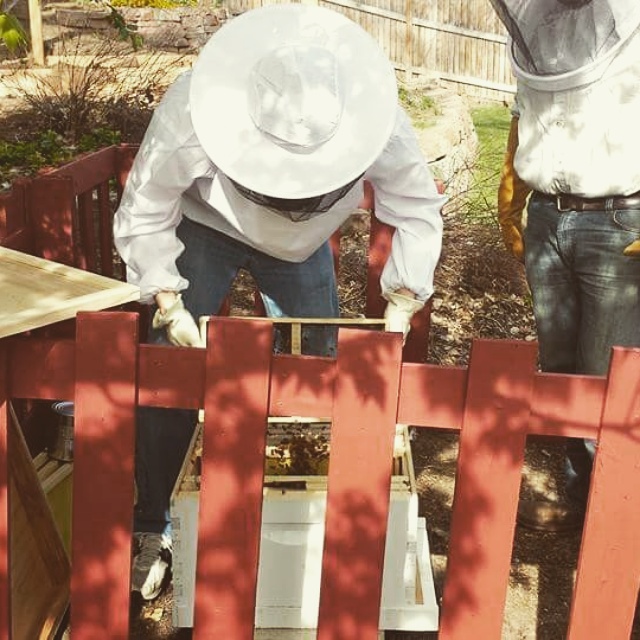 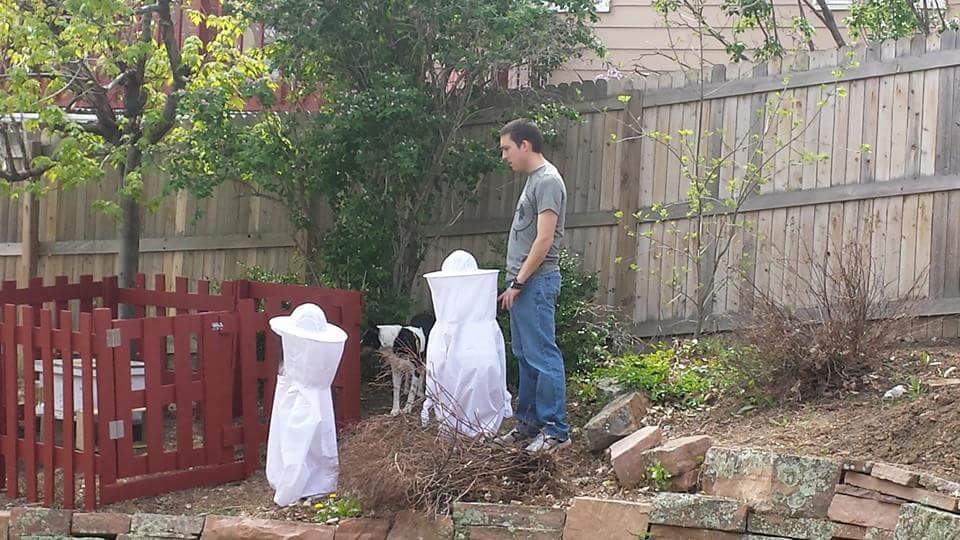